Pakistan ranks poorly on financial inclusion side, as according to SECP’s own data, only 210,000 retail investors have trading accounts and the number of active investors is about 100,000. This accounts for less than 0.1% of the population. Karachi houses over 50% CDC accounts whereas Lahore, Islamabad and Faisalabad are ranked as 2nd, third and fourth by having 19%, 9% and 2% of the CDC accounts. Indian regulator did setup a national stock exchange and erected an infrastructure having 250,000/- access points across India to facilitate potential investors about the “care” and “protection” and still leaving the choice in the hands of investors’ as to whether, they wished to open an account with BSE or NSE.

Pakistani Regulator on the other-hand concluded a rare-move of Capital Market Hub which tried replicating the Indian modular strategy for penetration into the masses. Pakistan has for about 59 cities where the population is over 100,000/- which means Pakistan is better poised to develop at a much faster and neater landscape of thriving capital market. Lust and Greed are the known white carbons which block vision.

According to numbers of SECP, the regional markets such as Bangladesh has 2.7m investors, Malaysia has 2.5m and Thailand having 1.46m are better than us where the number of registered UINs is less than 225,000. Comparing us with 32 million of India or 630,000 of Sri-Lanka against odds of just 21 million would be an obvious stunt.

A document which is present on the SECP website under the name of Capital Market Development Plan and Roadmap 2020-2027 observes that “one of the reasons for this low investor participation in Pakistan is the boom-bust cycle in the market. Our analysis shows that retail investors follow the market returns.” 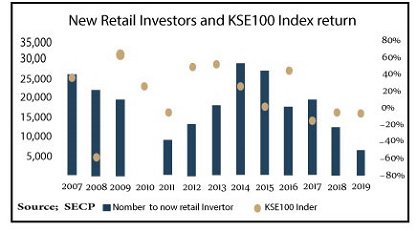 Some of the other reasons which are often cited for low retail participation also include: 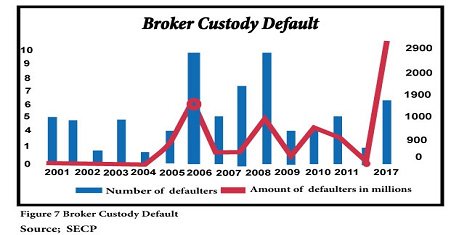 According to the SECP, since 2000, custody defaults by the brokers have resulted in claims up to PKR 8 billion with at least one broker defaulting every year since 2008 and average of 3 per annum. In addition to the custody defaults there is a general lack of quality brokerage houses; most are conflicted on account of proprietary trading, participation as a party in leverage product (MTS/Badla) and misalignment of interest leading to approach of generating trading volume. In the month of February 2018, PSX Board approved and sent a plan to SECP for a gradual replacement of inefficient leverage products with effective single stock, cash settled derivative products that could have also concluded deliverable futures and migrated existing margin financing to banks in a systematic manner. This could not happen, as the former Managing Director, Mr. Richard Morin, wrote a letter to Securities and Exchange Commission of Pakistan (SECP) and withdrew Board recommendations citing that “he was new to the exchange, and wanted to look at the proposal before embarking upon implementation”, and now, he is not with PSX anymore, but the levelling of SECP’s own recommendations continues unabatedly.

In order to eliminate custody defaults, the Plan suggest that “the custody of Client assets should be with third party non-broker-custodians or the banks only.”

Retail investors in most of the markets demand margin financing and leverage. Leverage products have not been able to develop properly ever since “badla” was phased out post 2008. This is a major reason why daily trading volumes on the Pakistan Stock Exchange have declined by over 90% over the past ten year.

Previous Pakistan stock market performance and outlook in 2020
Next How do you self-isolate in a refugee camp?