“Thousands have lived without love, not one without water”– W.H Auden

Water is the most crucial element and is regarded as the fundamental sustenance for the survival of mankind and other beings. Amongst the most critical and vulnerable threats to Pakistan is the threat of looming water crisis. Quoting World Economic Forum (WEF) report, it says that water is the major threat to Pakistan followed by inflation, terrorism and unplanned urbanization. According to International Monetary Fund (IMF) report, Pakistan stands at number third in the list of countries that confronts the water scarcity and there is a prospect that the situation will worsen by 2040 when Pakistan will witness the absolute water scarce country in the region. The global studies rank the Pakistan on number fourth among the most water consuming countries. 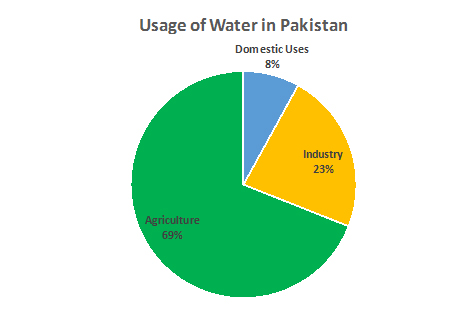 Out of total demand in Pakistan, nearly 90 per cent of water is consumed by agriculture and industries (agriculture = 69%, industry = 23% and domestic uses = 8%).

According to World Economic Forum (WEF), Pakistan can face absolute water scarcity by 2025. Health experts have also warned Pakistan that it can approach towards the absolute dry spell by 2025. There are numerous causes and reasons behind this looming crisis which can have an adverse impacts on society and economy if proactive initiatives are not entertained at the right time. If steps are not taken diligently, the nation will witness the water crisis havoc. And the water crisis is imminent if not handled strategically; it then makes no sense to cry over spilt milk.

Despite the fact that there exists profound technology and research & development (R&D); information can be accessed without even transcending the borders. Yet the societies and government failed to inculcate the significance of climate issues. The societies and the government were unable to understand the link between the human existence and nature which engendered the plethora of adversities causing water crisis an imminent event.

Another major reason contributing the water crisis in domestic water abuse. The metropolitan cities including Lahore and Karachi have the least amount of potable water to consume. In addition to it, urban water lines are rusted and cracked that allow sewerage water directly seep into the potable water. It was recently revealed that Lahore Waste Management Committee washes the roads of Lahore with potable water and wasting water about 30,500 liters every day.

Indus Water Treaty (IWT) was agreed upon between General Ayub Khan and Jawaharlal Nehru in 1960. The Eastern Rivers such as Ravi, Sutlej and Beas are belonged to India and the Western Rivers such as Jhelum, Chenab and Indus are belonged to Pakistan. Furthermore, the rivers could be used either the party in such a way that the flow of water could not be impeded. But the tensions started to escalate when India constructed the Banglehar dam on Chenab in 1999 which turned out to be the first prominent violation of IWT, breaching the covenants of the treaty. The construction of barrages and dams on the river Jhelum, Chenab and Indus in violation of IWT engendered the plethora of havocs that resulted in water shortage. In 2016, the premier of India, Narendra Modi commented, “water and blood cannot flow side by side”.

Rice and sugarcane crops consume large quantity of water as compared to cotton and other crops of Kharif. Additionally, farmers are encouraged to plant, sow and grow these water-consuming crops without imparting sound knowledge of water management and water distribution. Climate issues have also altered the patterns of the crops and it is changing at a ferocious speed which, in turn, resulted in water shortage. Farmers are asked to cultivate the crops in an Arid Zone which will further exacerbate the situation.

Higher water allowance in certain districts is even creating problems related to drainage and salinity. In Sindh, allocation of water per 1,000 acres of canal is far greater than in Punjab.

Pakistan is one of the poorest countries but it is one of the richest countries when it comes to population increasing capabilities. According to 7th population census of 2017 published on Pakistan Bureau of Statistics, Pakistan’s population has surpassed the 207 million (approximately 207.77 million) and it is still escalating at an alarming rate of 2.4 percent. This rapid and excess growth in terms of population consume high quantity of water and it is contributing to scarcity of water.

Industrialization has been a factor to promote water scarcity. Today’s era is the era of industrialization and industries consume large portion of potable water and contaminates the water with toxic smog that make water poisonous. Growing urbanization also leads to this crisis, the Khanpur Dam constructed for twin cities of Islamabad and Rawalpindi is becoming inadequate. An escalation in urbanization leads to water shortage and the dams constructed for urban water supply have become inadequate due to increase in population.

Water nationalism also plays its role and it is a notion of masses that any dam or water reservoir constructed in a particular province, it means that water is related to only that district and possesses absolute power over it. For example if dam in constructed in Sindh, it means the water of Sindh and not of others. It also approaches to water crisis and this pseudo notion must be abrogated.

Reduction in storage capacity has also become the contributing factor to water crisis. According to research study on water resources in Pakistan, water almost having an economic value worth $70 billion is being dumped into seas because of lack of water reservoir. According to Indus River System Authority (IRSA), Pakistan has only two big reservoirs, namely Jhelum and Chenab and can save water up to 90 days. India can save water up to 190 days, whereas USA can save water up to 900 days. The existing storage reservoirs available at Tarbela, Chashma and Mangla are losing their storage capacities and therefore, it causes wane in the available water.

Certainly, water shortage can engender the adverse impacts that will be vulnerable to dramatic changes in the patterns. Water crisis have severe adverse impacts on economy as well as on society. Water is desperately needed for the agriculture in Pakistan and water crisis has adversely affected the agriculture sector in Pakistan. According to Economic Survey of Pakistan, the agriculture sector contributes 21 per cent of the total gross domestic product (GDP) of Pakistan; which make the hell of difference. Because of this adversity, GDP of Pakistan has slumped down to 3.29 percent (in 2019).

As less water means less cultivation of agriculture or decreased crops, it will not only perplex the situation of agrarian society but also will make Pakistan hope upon other countries to meet the fundamental sustenance.

This prolonged crisis can lead to categorical drought in Pakistan. According to International Monetary Fund (IMF) report, it says that the Pakistan can face absolute water scarcity in 2025 and the situation will further be exacerbated in 2040 when Pakistan can approach to the most water-stressed and drought. Furthermore, the health experts have also warned Pakistan that if steps are not initiated at the earliest, Pakistan will witness dry spell by 2025.

Unplanned urbanization has been a significant effect of the water crisis, the escalated growing population and urbanization, without efficient and proper mechanism, heading towards the cities will promote the increase in unemployment rate in Pakistan. According to Economic Survey of Pakistan 2019, the unemployment rate in Pakistan is 5.79 per cent.

Orchards of Pakistan bring home a healthy amount of foreign exchange, which can be affected by water shortage. Export of orchards is fruitful for Pakistan because it brings foreign exchange which will enrich the exchange market and stabilize it.

The worst impact of water crisis would be that will cause harm to the national tranquility because the nations will be involved in armed conflicts and tussles to acquire water. It will lead the nation to disintegration, disharmony and in disarray.

Globally, 14 billion gallons of water are dumped into the sea and annually 1.8 million people die of diseases because of consuming polluted and toxic water. According to United Nations Children’s Fund, formerly United Nations International Children’s Emergency Fund (UNICEF) report, it was mentioned that clean potable water is only available to 50 percent of schools and school-going children, whereas remaining 50 percent are deprived of drinking water. Globally, 5,000 children die of diseases after consuming impure drinking water.

Pakistan is one of the poorest countries but it is one of the riches countries when it comes to population generating capabilities. According to 6th population census report of 2017 published on Pakistan Bureau of Statistics, Pakistan’ population has surpassed the 207 million (approximately 207.77 million) and it is still escalating at an alarming rate of about 2.4 per cent, which definitely needs to be checked. In Pakistan, clean drinking water is available to only 30 per cent of the population, whereas others are deprived of it. On the other hand, growth rate of agriculture is slumping down due to scarcity of water level as compared to population. To keep up the pace of agriculture growth comparable to population, it is crucial to cultivate the teemless land for which management of water usage should be proactively set in order to halt the hazardous situation in the future.

When there are problems, there will be remedies of those problems to tackle the situation. In order to increase the water storage reservoirs, for this purpose, construction of dams should start immediately, namely Kalabagh dam, Chashma dam and Thal reservoir.

Managing water resource is the need of time when Pakistan is already in short of water. For this purpose, it is needed to repair the rusty and cracked water lines so that water losses can be hedged, awareness should be inculcated to all people to carefully consume water without wasting it, government should make laws on water conservation as created by Western countries, efforts to be made to convert the present rotation based irrigation system to demand-oriented irrigation system and modern irrigation techniques such as trickling and sprinkling should be entertained.

Water is categorically misused through different means as already mentioned. Hence, it is the need of time to divide water into two parts, the way Western countries have mechanized their system. One part should be of clean and potable water that must be used for drinking and cooking purposes, whereas the other part should be of polluted and dirty water which is to be used for household chores and needs.

It is necessary to felicitate the former prime minister of Pakistan, Shahid Khaqan Abbasi, on his initiative. He announced the first National Water Policy, vowing to fight against the threat of water crisis. According to an apex court, Chief Justice has approved for construction of Basha and Mohmand Dams and the total funds collected is Rs.4.6 billion. These initiatives were taken in order to halt the vulnerability of scarcity of water.

It is the sole obligation of Pakistan to handle this issue efficiently and effectively. Though it is a daunting challenge but it is not impossible to solve the problem. If the situation is not handled at its earliest, it will create plethora of adversities and jeopardize the lives of average Pakistanis. Not only will this but the nation witness an economic meltdown in the region. It’s not too late yet, if steps are proactively considered, Pakistan will not only abrogate the vulnerability of water crisis but also it will reach an acclivity of social and economic progress, prosperity, integration and growth. Yet there exist prospects of integration and growth.

The Author is a Lecturer (Management Sciences), SZABIST
Share