Every progressive nation ensures the inclusion of women in its socio-economic mainstream, because the world cannot have a sustainable future, if this half of its population is not skilled enough to play a productive role in the community. Ideally, women are educated and qualified to earn a healthy income, while the society provides them opportunities to contribute positively. Since, gender-diversity promises optimum utilization of human-resources in a society, the corporate sector also supports female-literacy to engage them in professional and business operations.

Remarkable programs for women-empowerment have been launched by some corporate enterprises in Pakistan. Among these, Sindh Engro Coal Mining Company (SECMC) – a JV of Engro Energy Limited (EEL) – has taken an exemplary initiative, through Thar Foundation to inspire and train the women of Tharparkar – a remote region of Pakistan, where a majority of the desert-dwellers are deprived of life’s most essential needs like; food, potable-water, healthcare, education, etc. Since the Company is operating multiple resourceful ventures in the Thar District, its management has pledged to improve the quality of life for the local masses. This Corporate Social Responsibility (CSR) intervention by Thar Foundation has a special focus on empowering women, both financially and socially including a ‘Grants’ program for the deserving beneficiaries. 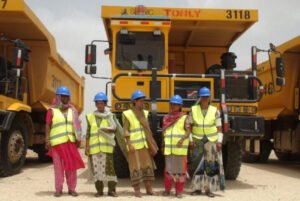 At present, with the generous support of SECMC and Thar Foundation, a growing number of women in Thar are playing active role in the rural economy, while some of them have also been trained and appointed as dump-truck drivers. These women drivers are deployed at Thar Block II coal mine and power projects – one of the largest reservoirs of lignite coal in the world, which are being developed by SECMC and Engro Powergen Thar Limited (EPTL) with partner organizations. The ‘Female Dump Truck Driver Program’ launched in 2017, near Islamkot town in Thar, has received an overwhelming response from the women living in the impoverished area. This pioneering initiative has trained and employed the poorest women of Thar, as drivers of the largest dump-trucks in Pakistan that carry 60 tons load. These women are paid competitive salaries, for transporting coal from the mine to the power plant thus playing a critical role in providing energy security to the country. The program has now attained global recognition, being recognized at various local and international forums with pride and praise showered on these female dump trucks. 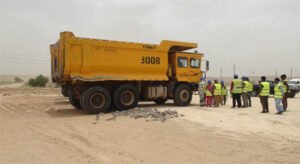 Nusrat Khaskheli – a qualified female dump truck driver – is the mother of 3 children and hails from the Mithi town of Thar district. She is a middle pass and was dependent on the meager income of her husband because there was no livelihood opportunity for her to contribute to her home. She broke all the barriers and decided to become a trained industrial worker after joining as Woman Dump Truck Driver with SECMC – and her life has not been the same since then. She has recently been decorated with the prestigious award of Sindh Women Commission for not only contributing to her family’s uplift but also emerging as a symbol of encouragement for Thari women to emulate.

In addition, Thar Foundation has also launched the Khushaal Naari (KN) program, to train and support women of the area to become entrepreneurs and market their products. Under the Khushaal Naari initiatives 20 females have been trained as professional uniform stitchers and dress makers and are now earning a sizable income to support their households. In a similar effort under the Community Grants program 17 females have been provided with grants of up to PKR 50,000 to set up their own small enterprises which can help them develop economic agency. To date approximately PKR 2 million have been provided exclusively as grants to various stakeholders of Tharparkar.

Education remains a key focus area for females in Tharparkar. With dismally low literacy rate amongst females and lack of dedicated facilities for women, the Foundation has demonstrated a keen resolve to improve the education system in the region and focus on girl-child education. This has been achieved by establishing a network of 24 primary and secondary school units across various regions of Thar where almost 1,200 female students are currently enrolled and are receiving quality education in a functional school experience. The female students at the Thar Foundation schools are provided the opportunity to participate in extracurricular activities as well. These include activities and initiatives such as field trips; science exhibitions; spellathon contests; and surprisingly the female football tournaments. Females who had earlier never been exposed to the sport of football now have become adept players with 02 girl-students of Thar Foundation school – Jamna Bheel and Devi Jhanjho, aged 13 and 11 respectively, representing Pakistan in the Gothia Football World Cup in China in 2019. 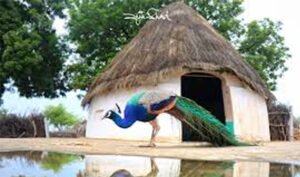 Another crucial element of providing equitable agency and access to females in Thar has been provision of quality health care. The Foundation realizing the incidence of maternal and neo-natal health has established a network of hospitals and clinics – ably supported by mobile medical bus – to ensure that females get the required healthcare. These medical facilities provide free of cost consultation, diagnostics, testing and medicines to the residents of Thar. As a result of the medical facilities now available to the residents there has been zero case of maternal or neo-natal death in Thar Block II over the past five years.

Under the health interventions for women of Thar, the Foundation has also started unique medical initiatives such as an Artificial Limb camp. Under this program through excessive community outreach and evaluation, 15 females have been provided with prosthetic limbs which have helped improve the quality of life for these females and in some cases made them productive member of the society.

Traditionally, the Thari women have always performed the task of walking across the desert, daily, in scorching heat – on average ranging from 40 to 50 degrees Celsius – to fetch water from the nearest well, usually located many miles away. To relieve these women from this trivial, but rigorous task, Thar Foundation has taken affirmative action to install and renovate Reverse-Osmosis (RO) plants in Thar, to provide WHO-compliant drinking water to the residents of the Thar community. To date the Foundation has set up 18 RO plants with the unique feature that 10 of these plants are actually run by trained females from the community who now earn additional income as female RO plant operators for the Foundation.

One such beneficiary of this initiative is Heena Kolhi, a 25-year-old woman from Islamkot, District Tharparkar. She got her early education from Islamkot Town and graduated from a government college. Thar Foundation provided her the opportunity to demonstrate her abilities and made her supervisor of its Women RO Plant Operators Initiative. After initial trainings under the program she now not only operates the plant and plays her part in providing clean drinking water to the people, but has also convinced and trained 11 other women of the area to come out for a job and get trained under the program. Besides these females the RO Plants continue to benefit approximately 30,000 residents of Thar Block II and beyond.

According to the World Economic Forum’s (WEF) recently released Gender Gap Index report, Pakistan ranks amongst the bottom three countries evaluated on the index. With poor access to social indicators like; health, education and financial inclusion amongst other areas, the report identifies that females in Pakistan lack the financial, economic, social and political agency. Given that the country’s 50% population approximately comprises of females, it is imperative for us to make the change necessary to deploy equitable access for all.

In Tharparkar, women who were traditionally confined to domestic chores like; cooking, collecting fuel wood, nurturing kids, agriculture and milking domestic animals; are now smashing centuries-old taboos and barriers through their courage, confidence, and resilience.

As part of efforts to work on the Sustainable Development Goal (SDG) of achieving gender equality and women empowerment, Thar Foundation, SECMC and Engro are all focused in developing programs and initiatives that can skill-up and train a future breed of women entrepreneurs, leaders, industrial workers and qualified engineers who can actualize their potential and become productive members of the community. In today’s fast changing world and global economics, this is not only a good-to-have but a business and societal need, if we are to truly progress and develop as a country.