A Singapore Airlines flight connecting the city-state with John F. Kennedy International Airport in New York is the longest regular non-stop passenger flight worldwide, both in terms of distance and travel time. The flight is a mammoth 15,347 kilometers, currently lasts for 18 hours and 40 minutes when traveling to Singapore and is operated with an Airbus A350.

The coronavirus-induced turmoil in global air traffic has also affected the world’s longest flights. In the case of the Singapore-New York connection, the route was brought back in November, but changed from Newark to JFK airport to better accommodate an increased cargo load that is expected to make up for decreased passenger demand, extending travel distance slightly.

A second extra long flight to JFK is the Philippine Airlines connection linking New York to Manila across 13,690 kilometers. The route also uses the Airbus A350 model and has been in operation since October 2018. The airline traveled even further – non-stop from Manila to Miami – in May of last year to pick up and repatriate cruise personnel stranded as a result of the coronavirus pandemic. Tailwinds and a light load on the way there allowed the Boeing 777 to cover the almost 15,000 kilometers in just under 16 hours.

More non-regular and repatriation flights caused by the pandemic have outdone the regular departures presented in the chart. Air Tahiti flew directly from the island to Paris without the usual stopover in Los Angeles in a single 15,700 kilometer jaunt in March. COVID-19 restrictions made the stopover impossible (since the U.S. makes transits immigrate), but fewer passengers also meant the plane had a longer reach. Austrian Airlines covered more than 16,000 kilometers traveling empty to pick up Austrian citizens in Sydney the same month. A Virgin Australia plane even traveled 16,500 kilometers non-stop on April 14 from Paris to Brisbane on a similar mission to repatriate Frenchmen and women.

Singapore Airlines has three flights among the world’s top 10 longest routes by kilometers, including the route between its hub and San Francisco, which is also flown by United Airlines. Air India added an extreme long haul, also to San Francisco, to its flight plan in January 2021, covering 14,000 kilometers from Bangalore and entering the top 10 of the world’s longest flights in rank six. 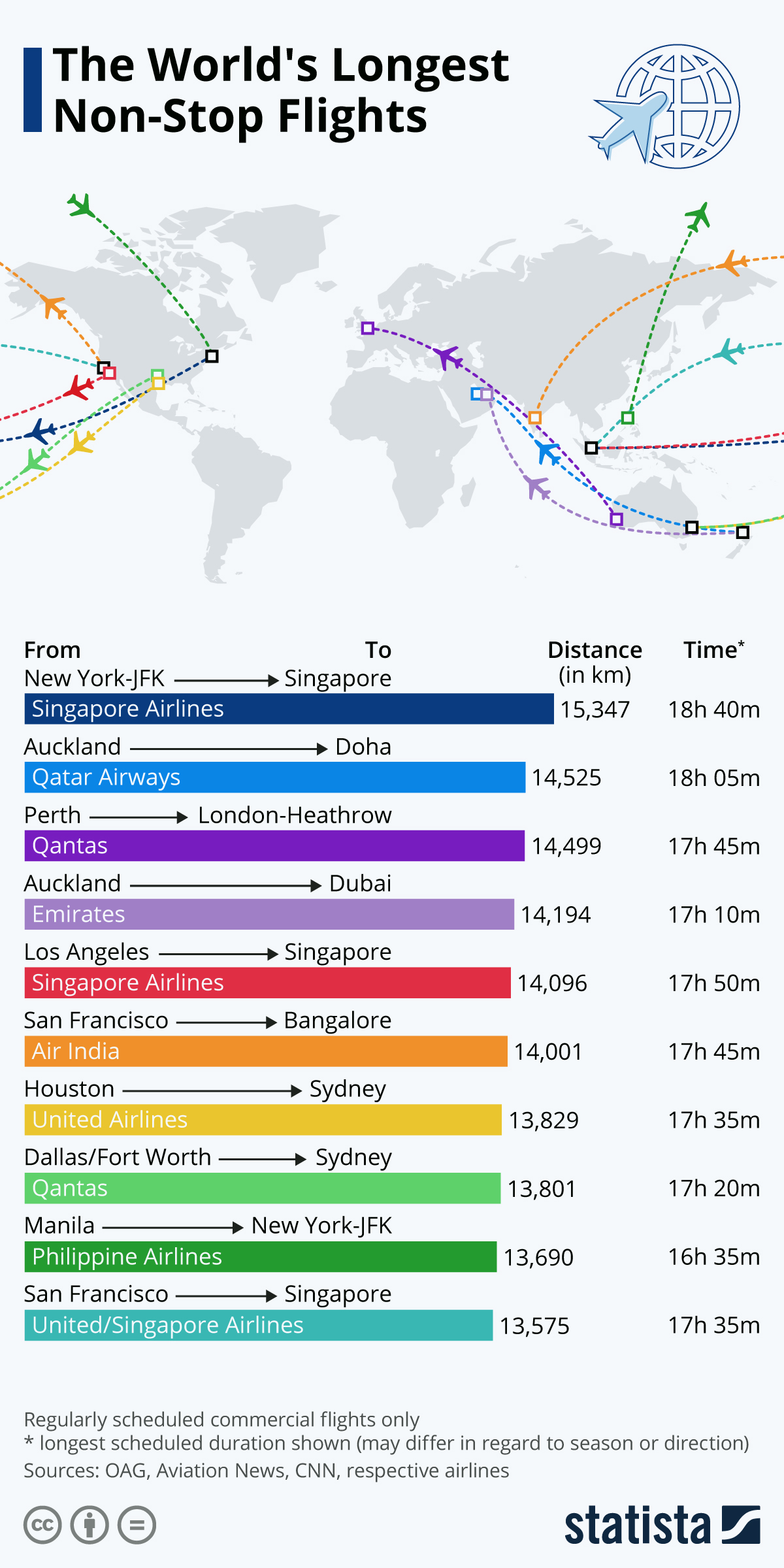