Winston Churchill is long remembered as one of the greatest leaders in modern history and the savior of democracy.

He was tasked with the daunting task of leading Britain and the Allied powers to victory against the Nazis during the Second World War. His wisdom, upright character and persistence led Britain from the brink of defeat to victory in the most brutal war of the 20th century. 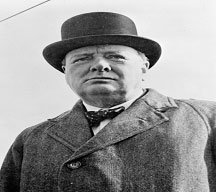 Winston Churchill was born to an aristocratic family in 1874 and served in the British military. He would go on to become a prolific writer before entering into politics. Churchill became British Prime Minister in 1940 during the height of the Second World War.

His long political career is also remembered for its persistence. It took Churchill a staggering 40 years to finally become Prime Minister. But when he finally took the helm, he became arguably the greatest leader of the 20th century.

He was not only instrumental in working with the United States and Russia to defeat the Axis powers, he helped establish the post-war peace that would lead the western world through one of its greatest periods of prosperity.

Churchill’s leadership style would prove so powerful that he would be elected Prime Minister again in 1951.

Among Churchill’s greatest strengths was his power of oratory, which helped him connect with an entire nation. His life was filled with memorable quotes that leaders to this day use for inspiration.

Phrases like, “We will never surrender,” “The Iron Curtain” and “This was their finest hour” have withstood the test of time. Among his many honors include a Nobel Prize for Literature and being the first person to become an honorary US citizen.

Churchill’s inspirational leadership style is especially notable when you consider his bitter struggle with depression – the so-called “black dog” of his existence.

In fact, historians attribute many of Churchill’s successes to his ability to use his manic depression and bipolar personality to his advantage. These are just some of the reasons that make Winston Churchill truly special. Most inspiring leader of all time Matthew Boulton was a pioneer in manufacturing, he was …