Home / Infographics / The World’s Most Dangerous Countries For Workers

The World’s Most Dangerous Countries For Workers

Many countries have stringent regulations when it comes to occupational safety but others have far lower standards. In most cases, employers across the globe are obligated to provide a safe and secure working environment for their employees but that certainly is not the case everywhere with regulations still shockingly short-sighted in some countries and a lack of government exacerbating problems in others. The Lloyd’s Register Foundation recently released its World Risk Poll which surveyed 150,000 people in 142 countries on safety and risk in the workplace. The research found that 19 percent of workers worldwide have been seriously injured on the job at some point in their lives.

The data paints a picture of two worlds: low-income economies where the riskiest occupations are in agriculture and fishing and high-income economies where the biggest hazards come in the form of mental health issues from workplace harassment and violence. According to the research, there, there is a significant gender gap in occupational safety with 23 percent of men worldwide saying they have been seriously injured at some stage compared to 14 percent of women. 34 percent of farmers, fishers and agricultural workers in some of the world’s poorest regions say they have been seriously injured which makes those professions the most hazardous on the planet, followed by construction and manufacturing.

The share of people seriously injured at work is signficantly higher than that in some countries, however, particularly in Africa. Shockingly, 69 percent of Sierra Leone’s workers say they have had a serious workplace injury with The Gambia and Malawi also significantly higher than the global average at 64 percent and 62 percent, respectively. Mynamar is an anomaly as it is the only non-African country among the most dangerous. At the other end of the scale, Poland has the lowest rate of serious injury at work at four percent, followed by Singapore’s five percent and Italy’s seven percent. The U.S. has a higher rate at 20 percent.

Physical injuries are only part of the issue, however, and the research found that as many as 50 percent of workers in some countries experienced violence and harassment in their jobs. The ILO’s Joaquim Paulo Pintado Nunes commented on the findings by saying that “this is the first time that we have heard the voices of ordinary workers from across the world, talking about the risks to physical and mental wellbeing they face in the workplace”. He added that “this will give us a better picture, complementing the information from official statistics, which are often incomplete or less detailed”. 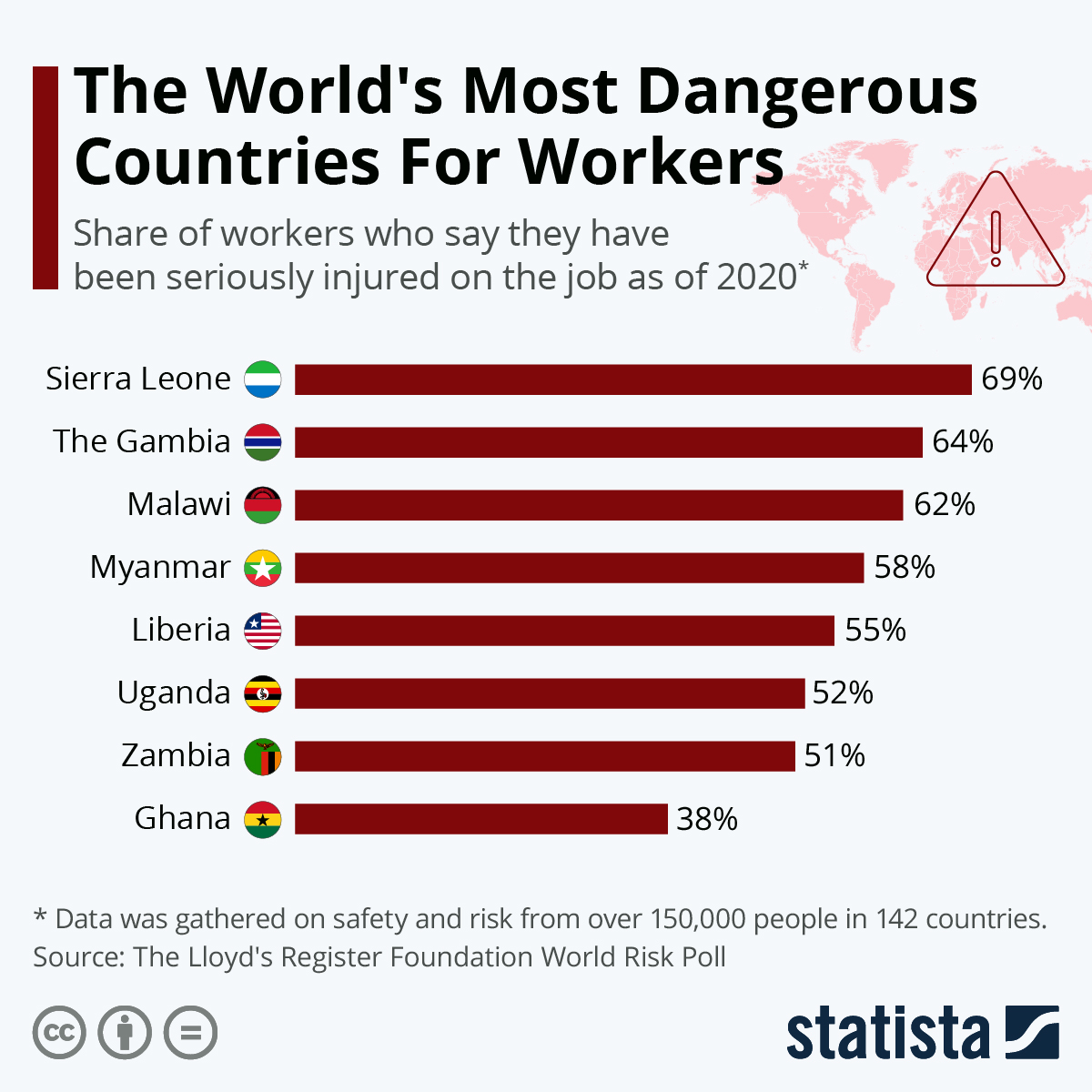