Law expected to come into force on July 1, and represents most radical change in Hong Kong since 1997 handover.

China’s parliament has passed controversial national security legislation for Hong Kong that Beijing says is necessary to deal with issues of terrorism, subversion and foreign interference but critics say will outlaw dissent and destroy the autonomy and freedoms promised when the territory was returned to China in 1997.

The bill was passed unanimously by the Standing Committee of the National People’s Congress at a three-day meeting that began on Sunday, according to multiple media reports in Hong Kong citing unnamed sources. The draft of the law has not been made public.

At her weekly news conference on Tuesday, Hong Kong leader Carrie Lam declined to comment on the law.

The legislation will come into effect when it is gazetted in Hong Kong – bypassing the semi-autonomous territory’s own legislature – and is expected to be in force by July 1, the anniversary of the territory’s return to Chinese rule.

Al Jazeera’s Katrina Yu, reporting from Beijing, noted the process had been fast-tracked.

“It’s very symbolic that this law has been passed just a day before the anniversary of Hong Kong’s handover from Britain back to mainland China,” she said. “It seems to be Beijing telling the people that at the end of the day it is China that is in charge in Hong Kong and China’s leaders will do whatever they deem necessary to protect Hong Kong.”

China announced its plan to impose the legislation on the eve of the National People’s Congress last month, after nearly a year of sometimes violent pro-democracy protests in the territory that began over a now-withdrawn extradition bill with the mainland.

The security bill gave renewed momentum to the protests, which had calmed as the coronavirus pandemic made it more difficult to hold mass gatherings.

“The fact that the Chinese authorities have passed this law without the people of Hong Kong being able to see it tells you a lot about their intentions,” Joshua Rosenzweig, head of Amnesty International’s China team, said in a statement. “Their aim is to govern Hong Kong through fear from this point forward.” 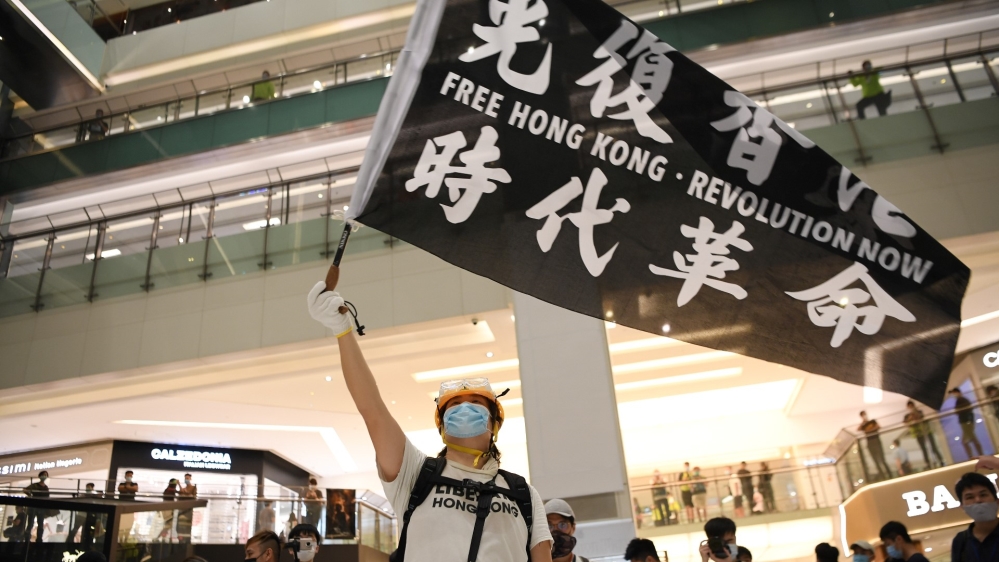 A pro-democracy protester waves a banner during a protest at the New Town Plaza mall in Sha Tin in Hong Kong earlier this month [File: Laurel Chor/Reuters]

A few hours after it emerged the law had been passed, Joshua Wong, a leading activist, announced he was resigning as leader of pro-democracy group Demosisto and would continue his fight privately.

Writing on social media, he said the legislation marked “the end of the Hong Kong that the world knew before. From now on, Hong Kong enters a new era of reign of terror. With sweeping powers and ill-defined law the city will turn into a secret police state.”

Wong described himself as a “prime target” of the legislation. Colleague Nathan Law also said he would step down.

China has said the legislation will cover acts of secession, subversion, terrorism and interference by foreign powers in the territory’s internal affairs. It will also allow mainland intelligence agencies to establish themselves in Hong Kong.

Hu Xijin, the editor-in-chief of the state-run Global Times, said on Twitter that the law had been passed and its heaviest penalty was life imprisonment. State media is expected to publish more details of the legislation, which is said to include six chapters and 66 articles, on Tuesday afternoon.

The South China Morning Post said the law was approved unanimously by the standing committee’s 162 members, within 15 minutes of the meeting starting at 9am (01:00 GMT). Only a handful of Hong Kong’s delegates to China’s parliament saw the draft before it was passed, the paper added.

Demonstrations are usually held on July 1 and events are planned this year even though police have said rallies cannot happen because of the coronavirus.

Posters for gatherings continued to be shared across social media platforms on Tuesday. Some 4,000 police are expected to be on standby.