Road accidents are very common in developing countries especially in Pakistan and the situation has become worsened day by day. Experts have mentioned in the different research reports that that mostly they (accidents) are caused by different factors such as careless driving, traffic rules violation, bad roads and faulty old vehicles.

The Government of Pakistan should explore the factors that may helpful in the controlling of traffic rules violation and mitigation of road traffic accidents. The Government of Pakistan should also start effective awareness programs regarding traffic safety rules and also determine the effectiveness of law enforcement to control the traffic rules violation. According to the World Health Organization (WHO) report (published in 2013) road accidents will become the fifth major cause of deaths by 2030. Over 3400 people die on the world’s roads every day and tens of millions of people are injured or disabled every year. Children, pedestrians, cyclists and older people are among the most vulnerable of road users. WHO had also predicted that road accidents were claiming 30,310 lives in Pakistan annually. This means that approximately 20 people out of 100,000 die in road accidents in a year, making Pakistan rank 67 globally for a higher percentage of road traffic accidents.

Researchers have mentioned that Punjab has proven to have the highest road accident deaths, followed by Sindh, KPK and Balochistan. In Karachi alone, thousands of lives are lost yearly. Overspeeding is a recurring problem yet little heed has been paid to curb the frequency of such accidents. Irrespective of laws being in place, monitoring of such laws has been minimal. Untrained drivers without a valid license often make their way onto the driving seats of passenger vehicles and speed their way to death while putting others in harm’s way. 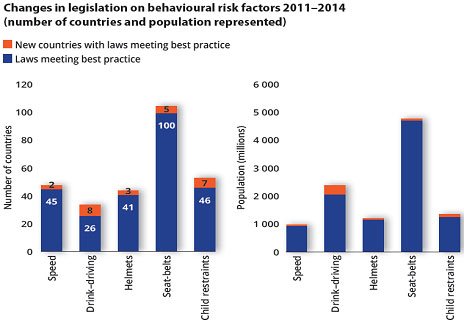 Furthermore, in developed countries, drivers of passenger vehicles go through rigorous scrutiny by motor carrier safety departments before being allowed to drive, but the National Highway Authority of Pakistan has been unsuccessful in sustaining a set protocol for not only motorists but also enforcing speed limits. Blaming the authorities alone for our dare devil adventures is unfair. Motorists should also be held responsible for their reckless driving. Apart from enforcement of stringent road laws and monitoring, motorists too need to be coached on safe driving. It is time for action now.

The government official in Islamabad’s Excise and Taxation Department Program reported that one of the main causes of growing road accidents in the country is a huge number of old, unfit vehicles that are running on the roads.

It is also said that that out of almost 850,000 vehicles registered under this department, a total of 503,808 vehicles were registered before and up to 1990. As a results more than half of the total registered vehicles are about thirty or more than thirty years old, hence causing road accidents.

Experts reported that there should be a proper law in place to remove all vehicles, which are greater than ten years old, from roads in the country as per the global norm. Internationally banned old vehicles are being used in our country. However, many transport experts mentioned that human error mostly by unskilled drivers, is one of the most common factors of growing road accidents in Pakistan.

Poor maintenance of overused vehicles, lack of awareness among drivers has been indicated in present accidents. The Pakistan Institutes of Medical Sciences (PIMS) stated that road accidents cause long-term stress, leading to depression, anxiety and sleep issues for the injured ones. The injured are sometimes permanently disabled. Furthermore, the statistics show that traffic accidents are the leading cause of deaths among people with ages ranging from 15 to 30 in Pakistan.

No doubt, road accidents are in high numbers because citizens ignore traffic principles and road signs, break signals, recklessly perform wheelie on bikes, use mobile phones while driving, overtake from the wrong side, use drugs and wrongly park. Surprisingly, citizens take safety features as the least important thing when they buy cars. Many people believe that the government of Pakistan is not doing enough to educate drivers on traffic rules and regulations. A lot of people who drive, don’t have licenses and those who have licenses, got them unlawfully, without taking part in any driving tests. According to traffic police, 80 percent of Pakistanis don’t follow basic safety precautions like, fastening of seat belts, or wearing helmets.

WHO mention in its reports that road traffic crashes cause not only grief and suffering but also economic losses to victims, their families, communities and nations as a whole, costing states on average 3 percent of their Gross National Product (GNP). Indirect costs, like loss of productivity, damage to vehicles and property, reduced quality of life and other factors, must also be included in calculating the true cost to society.