In Europe, the high nutrient prices have farmers questioning whether to curb plantings. Canadian authorities cautioned that growers may cut back on usage, while in corn powerhouse Brazil, there’s a risk that soaring fertilizer costs and less supply will limit crop yields.

The global fertilizer market had already been tightening before plants were forced to cut production on the back of the recent spike in the cost of gas, a key feedstock. That’s sent prices of nutrients crucial for growing staples soaring — to a record in some cases — risking smaller harvests or even more expensive food down the line.

Fertilizer plant shutdowns in the UK highlighted how critical the situation is, because it cut off supplies of carbon dioxide, a byproduct that’s needed for everything from slaughtering animals to packaging food. A deal was struck this week to maintain output in the coming months, averting more chaos for the sector.

The risk is that it’s just a quick fix. The owner of the British plants, CF Industries, said that CO2 users need to look for new sources of supply. An industry group also warned that temporary fertilizer-plant closures in Europe could become permanent.

It’s a worrying sign for future harvests a time when global food prices are at a 10-year high. There are concerns that farmers in France, the European Union’s top wheat grower, may find it hard to source fertilizers next spring, regardless of the price.

In Brazil, where a lot of farmers haven’t secured their fertilizer needs or locked in prices yet, worries of non-delivery are increasing. President Jair Bolsonaro has said the nation faces the risk of fertilizer shortfalls next year due to falling Chinese output in the wake of high energy costs. 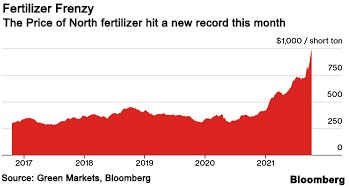 Shutdowns also risk hitting other parts of the food supply chain by crimping supplies of carbon dioxide, which has a wide range of uses from stunning animals for slaughter to food packaging that boosts shelf life.

Fertilizer prices jumped in the past year as a crop rally helped farmers boost purchases of the nutrient. They’ve been further supported after Hurricane Ida struck the heart of the US fertilizer industry and Storm Nicholas threatened more damage in the Gulf of Mexico. Higher costs of the key farming input risk further exacerbating global food inflation at a time when hunger is on the rise.

Yara trades about one-third of the world’s ammonia, which is used in fertilizers, but also relied on in industries such as automotives, textiles, health care and cosmetics. The company, which said it will curb output at a number of plants, produces ammonia in Europe at sites in the Netherlands, Germany, Norway, Italy, France, UK and Belgium.

Fertilizers are crucial to feeding the world’s growing population and are so important that one type — potash — is part of mining giant BHP Group’s shift toward commodities of the future as it exits fossil fuels. Crop nutrient trading is largely focused on annual contracts or in the spot market, rather than on a futures exchange.

A United Nations measure of global food prices is already near the highest in a decade. Costs jumped as extreme weather hurt crop prospects, the pandemic affected supply chains and shipping costs rose. That’s increased inflation risks for central banks and consumers, particularly those in poorer nations that are dependent on imports.

As well as curbing output of fertilizers crucial to feeding the world’s growing population, plant closures could further tighten supplies of carbon dioxide that’s produced as a byproduct. The gas is used to stun poultry and pigs, and any shortages would be another headache for farms and processors already suffering from a lack of workers.

The food sector also relies on CO2 for use in packaging to extend the shelf life of products such as meat and vegetables.

“It’s quite alarming really,” said Nick Allen, head of the British Meat Processors Association. “We’re talking between days and weeks from this really hitting hard, unless somewhere in the world — ideally here in Europe — there are supplies of this that can replace that amount of CO2 very quickly.”

Other industrial giants are also feeling the pain from surging gas and power prices that’s raising fears of a long-lasting impact on inflation. Europe’s top chemicals firm BASF SE has warned of the impact of the jump in electricity costs, while copper producer Aurubis AG said high energy prices are dragging down profits.