PAGE: Tell me something about yourself and your organization?

Shaham Ahmad: I am a Fellow member of ICMA Pakistan and as a result of the recent elections I have been elected as a member of the current National Council of the Institute for the three-year term 2021 to 2023. The Council has nominated me as the ‘Honorary Secretary’ of the Institute in that capacity I am responsible to look after those affairs of the Institute as envisaged in the CMA Act and Regulations. I held the office of the Chairman of the Karachi Branch Council (KBC) of ICMA Pakistan during 2013 and 2014 and have also been heading the CPD Committee of KBC for quite a long time. In this role, I took several initiatives to promote and strengthen Institute’s relationship with the corporate sector. The CMA professional degree coupled with my practical experience of working for almost over twenty years in the private sector has helped me to perform the role of teacher and mentor. I am presently working at a senior finance position in Pakistan’s leading automobile manufacturing company where I have been employed since 2002.

PAGE: What are your views on logistics solutions for industry in Pakistan?

Shaham Ahmad: The logistics industry plays a vital role in the economic development of the country and forms an essential component of the supply chain. This industry provides efficient logistical solutions to the industry in Pakistan for promoting international trade and facilitating the movement of products and services within and outside the country. The modern logistics industry with incorporated e-business applications is providing value-added services to the industry in the areas of transportation, inventory and warehouse management, material handling, freight forwarding, packaging and supply chain management that helps connect businesses to suppliers and markets around the world. Logistics and supply chain management also plays a crucial role as a strategic tool for the manufacturing industry in gaining a competitive advantage.

Today, the CEOs and CFOs of business entities, especially those who are actively engaged in exports or imports, are more concerned about their logistics issues such as keeping low inventories to reduce the storage cost. Many companies are also outsourcing their logistics activities to third parties so that they can focus more on their core businesses. The services provided to the industry by the freight forwarders have assumed much importance these days as they are now offering one-stop real and cost-effective supply chain solutions that include efficient movement of finished products of the industry from the end of the production line to the consumers, and in some cases, movement of raw material from the source of supply to the beginning of the production line. All these customized services help the industry in trade facilitation and cost-saving.

PAGE: How do you see the shipping industry of Pakistan vis-a-vis the neighboring countries?

Shaham Ahmad: The shipping industry in Pakistan is lagging far behind its neighboring countries. This can be gauged from the fact Pakistan has only 11 cargo ships, owned by the Pakistan National Shipping Corporation (PNSC), whereas India has 842 ships, Bangladesh 347, Sri Lanka 40 and Iran 100 cargo ships. The two major ports viz. Karachi Port and Port Qasim handle 95 percent of all international trade and the 14 dry ports cater to high-value external trade. Out of Pakistan’s annual freight charges of USD 5 billion annually, the share of PNSC is only 5 percent due mainly to the fact that instead of export trade, it is mostly focused on import of petroleum products. Secondly, PNSC’s share in import of liquid bulk is only 26 percent whereas 74 percent of liquid cargo is imported by foreign vessels. Similarly, PNSC imports only 3 percent of dry bulk cargo while 97 percent of dry bulk cargoes are imported via foreign vessels. The combined capacity of all terminals in Pakistan is 10.15 million TEU whereas the total throughput in 2018 was 3.275 million TEU.

Pakistan has the lowest Logistics Performance Index (LPI) among countries with direct access to the sea in South Asia. According to a study by the World Bank, the cost to import a containerized TEU is estimated at USD 1,005 while the export cost is put at USD 765. In comparison, the import and export cost for a container for the UAE is USD 625 and USD 665 respectively. Pakistan also has comparatively higher operational costs including tariffs and terminal handling charges than in other regional countries, including Jabel Ali Port in Dubai and Salalah Port in Oman. It is estimated that the time taken to process import shipments at the Karachi Port is more than twice as compared to the UAE. Similarly, the time taken to meet documentary compliance is even longer than in UAE port.

The World Bank study pinpoints that Pakistan lags in different categories such as the ability to trace and trade consignments at ports; efficiency of customs clearance process; the frequency with which shipments reach consignee within scheduled or expected time; and quality of trade and transport-related infrastructure. These issues need to be resolved to bring the shipping industry of Pakistan at least upto the regional standard. The Private sector needs to be engaged in port development in Pakistan.

PAGE: What is your take on the road network in Pakistan?

Shaham Ahmad: Because of the economy and lower cost, road transportation in Pakistan is the preferred mode both for the people as well as for freight movement. Punjab has the highest share with 41% of the road network; followed by Sindh at 31%, KPK at 16%, Balochistan at 11%, and Gilgit-Baltistan (GB) at 1 percent.

There is no denying the fact that a sound infrastructure of the road network including highways, motorways, circular roads, bridges, etc. play a pivotal role in the economic development of any country. The growth of other sectors of the economy heavily depends upon the developed road networks. At independence in 1947, Pakistan inherited 50,367 km of roads of which 9,809 km roads were of a high type and 40,558 km of a low type. Today, Pakistan has a length of total roads of 264,401 km. which include both high and low type roads.

Globally, Pakistan stands at the 21st position as far as the size of its road network is concerned. During the last several years, the quality of highways is gradually being upgraded due to developments and road construction projects pursued under the China-Pakistan Economic Corridor (CPEC) and the Public Sector Development Program (PSDP).

In the Federal Budget 2021-22, the government has increased PSDP allocation of funds, mostly for infrastructure development, including road networks. I would suggest the establishment of a new independent and autonomous regulatory body to supervise and oversee the development of non-highway roads which are mostly in dilapidated condition across the country, especially in the megacity of Karachi. These non-highways are characterized by poorly designed roads, non-standardization of road, lack of road safety measures, and above all encroachments. The proposed regulatory body may coordinate with local and provincial bodies for the construction and improvement of non-highway roads and also conduct surprise financial and quality audits to test the quality of construction material being used, funds outlay for the newly constructed and repaired roads.

Shaham Ahmad: Gwadar had always been considered as a potential site for becoming a deep seaport. However, since its acquisition by Pakistan from Oman in 1958, serious efforts were not made to develop this site for national benefit. Eventually, in 2013, China came forward to offer Pakistan its collaboration to develop the Gwadar Port as part of its ‘Belt and Road Initiative’ project. By 2015, in joint collaboration with China, some development projects were kicked off and subsequently Gwadar Port became formally operational on 14th November 2016. In January 2020, Pakistan made Gwadar Port operational for the Afghan transit trade.

Today, Gwadar Port is the focal point for both China and Pakistan and is heralded as the ‘second great monument of Pak-China friendship’ after the Karakorum Highway. The development of Gwadar Port has stimulated the growth of different industries in Pakistan such as construction and real estate. Many housing projects have been initiated in Gwadar by the private sector. Motorways are being built to connect Gwadar Port with all the major important cities in the country. Railway lines are also being installed for transportation purposes.

The business sector is being attracted by the government to invest in Gwadar for which lucrative tax-free incentives are being offered. Lately, exponential growth is being witnessed in private sector projects which are monitored by CPEC Authority. Gwadar is termed as the ‘jewel of Asia’ and the ‘port of the future’. No doubt, Gwadar is soon going to become the hub of commercial activities in Pakistan that would transform the traditional trade routes and patterns. This would lead to development and prosperity not only in Pakistan but the entire region. In fact, the whole region is going to reap the benefits of unlimited opportunities provided by the Port. Envisioning the huge future prospect of Gwadar Port, many countries like Russia, Japan, Saudi Arabia, UAE, South Korea, Malaysia, Iran, Turkey and few EU countries have agreed to invest in Gwadar. 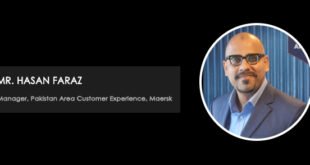 The role of Customer Experience in Shipping and Logistics