Sensex, Nifty closed 0.09 percent higher on Thursday. All eyes will be on the Union commerce minister Piyush Goyal’s press conference at 4 pm. Markets are anticipating the European Central Bank’s policy decision as it is expected to claw back stimulus on Thursday, taking a token step towards unwinding the pandemic mandated emergency aid.

France stocks were higher after the close on Thursday, as gains in the Foods & Drugs, Gas & Water and General Financial sectors led shares higher.

Falling stocks outnumbered advancing ones on the Paris Stock Exchange by 302 to 290 and 100 ended unchanged.

The CAC 40 VIX, which measures the implied volatility of CAC 40 options, was unchanged 0 percent to 18.96 a new 6-months high.

Britain’s export-heavy FTSE 100 ended lower on Thursday weighed by a strengthening pound and concerns over slowing economic growth, while easyJet’s share sale plan sent the British airline to the bottom of the mid-cap index.

The blue-chip index ended down 1.0 percent, recording its worst session in three weeks with consumer staple and pharmaceutical stocks weighing the most.

The FTSE 100, which jumped around 26 percent from October lows, is on course to end the week in the red as the rising spread of the Delta variant of coronavirus and supply chain issues raised worries of a slowdown in economic recovery.

Stocks end lower; Nasdaq and S&P 500 are on pace

Stocks lost more ground on Wall Street on Thursday after a small early gain faded, keeping the Standard & Poor’s 500 index and the Nasdaq headed for their first weekly decline in three weeks.

The S&P 500 fell 0.5 percent, its fourth straight drop. Healthcare and technology companies were the biggest weights on the benchmark index, offsetting gains by banks and energy stocks.

The latest pullback came as investors continue to assess the pace of economic growth amid worries that the rapid spread of the coronavirus’ Delta variant will damp consumer confidence and spending.

Canada’s main stock index extended its pull back from a recent record high as shares of industrial and consumer staple companies declined, with investors turning more cautious as the market enters a seasonally soft patch.

The index notched on Tuesday a record intraday high of 20,897.57 before closing lower. It also lost ground on Wednesday.

“Investor sentiment was running fairly hot in North American markets for almost all of 2021 and now we’re into a seasonal period that can be a little bit more challenging,” said Mike Archibald, portfolio manager at AGF Investments.

“There is a little level of market fatigue here … and there’s just probably a little reset that’s going to happen in the marketplace.”

Shares on Wall Street also ended lower after economic data stoked worries the Fed could move sooner than expected to scale back its accommodative policies. 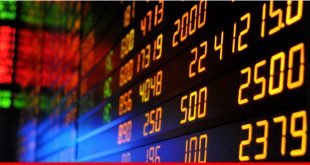