S. Kamal Hayder Kazmi 2 weeks ago In The News 14 Views

The world economy is in good shape international experts revealed, and the growth rate continues to be high, at 4 percent yearly in the Western world counting the Eurozone, and at 8 percent yearly in China and India in 2020, while in the future these statistics may rise. World demand for natural resources is escalating. This is causing an increase in exploration and production which has strong positive effects for seaborne trade, including the transport of manufactured goods. In this case, trade growth doubles compared to world growth. This is consistent with historical periods of high growth. Inter-Asia trade growth is very strong, with annual volumes shipped tripled by 2020 compared to 2012. This has a strong impact on, for example, the midsize container segment, the bulk segment and associated port facilities. The expanded Panama Canal has positive effects on trade patterns like US West Coast-East Coast container trade. Overall, we estimate the size (dwt) of the 2020 world fleet to be 50 to 60 percent greater than the 2012 level. World growth is dependent on readily available fossil fuel, with coal still dominant and relatively cheap compared to oil. The high price of energy remains a threat to growth but is also a result of high demand. The prices of the three alternative types of shipping fuels – HFO, MGO and LNG – follow the oil price, and like all three remain at a high and growing level in 2020 and beyond. MGO remains the most expensive of the three, at approximately 30 percent above the HFO price, with LNG at approximately 10 percent above the HFO price (including bunkering cost).

There is low regulatory and stakeholder pressure, and the experts see a negative trend with regard to the further development of global regulation. There has been a tendency to see more regional and local regulatory initiatives, but some of these are also losing momentum. One example of this is that the EU’s plan for implementing ECA-like requirements in all EU waters is put on hold and the discussions seem to lose ground and fade out. It is also revealed that the 0.5 percent sulphur global cap planned for 2020 is postponed until 2025. The proposed plan of having the shipping industry contribute to the United Nations Framework Convention on Climate Change (UNFCCC)-agreed Green Climate Fund is also shelved. The Ballast Water Management Convention (BWMC) has not entered into force. The US decides not to progress with its own ballast water cleaning standards, planned to be stricter than IMO standards, but enforces the IMO requirements in their own waters. 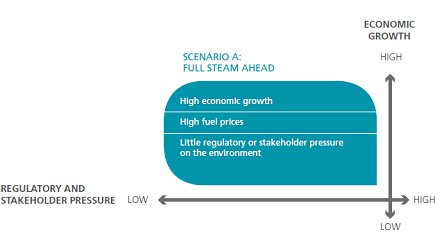 There has been no success in implementing MBMs, mainly because of major disagreements on the applicability of these mechanisms. The EU has also been unsuccessful in implementing regional mechanisms to reduce CO2 emissions from shipping. In a world where there is low regulatory pressure, greenhouse gas emissions are “free” and there is robust growth in seaborne trade: shipping thrives in its traditional way – risk capital is available, there is strong fleet growth with standard designs and scrapping rates are low. Still, technology and innovation represent competitive advantages for owners, yards and manufacturers. In 2020, the leading players are driving developments that exceed the level of environmental regulations in place, branding themselves above the minimum standards. The level of R&D in shipping is twice as high as 2012 levels.