Mr Ahmed Chinoy is a businessman by profession and social activist by nature. Being in his profession for over 25 years with a vast experience and knowledge, he is associated with the textile industry since the beginning of his career. He is also heading Pakistan Cloth Merchants Association, an organization looking after the trade regulations with regards to textiles in the country.

His business has diversified into more categories that are Construction Development, Project Management and Controlled Poultry Farms. He has served as the CPLC Chief for over 6 years and is associated with multiple NGOs working for the betterment of the country in different fields such as health, law and order situation, education and other departments. This work has led him to be the recipient of two highly prestigious National Awards: Sitara-e-Imtiaz and Hilal-e-Imtiaz.

He is currently serving as the Director of Pakistan Stock Exchange.

PAKISTAN &GULF ECONOMIST had an exclusive conversation with Mr Ahmed Chinoy regarding the Federal Budget 2020-21 and current state of the economy. Following are the excerpts of the conversation:

The Federal Government has ignored the Value-Added Textile Exporters and Manufacturers as no major incentives were announced by the Federal Government. We gave our suggestions for the budget. The industry has serious concerns over the new budget. People are protesting regarding the absence of any support for the ailing textile sector and its dwindling exports.

The International Monetary Fund (IMF) recently projected that Pakistan’s exports and imports would reduce due to the economic shocks from the rapid propagation of the COVID-19 outbreak. Exports are estimated to reduce by $1.86 billion to $23.732 billion during FY21. Similarly, imports are projected to decline by $4.64 billion to $48.291 billion during the outgoing financial year. Pakistan’s export has declined massively due to the outbreak of coronavirus throughout the world. The country’s exports reduced to $957 million in April 2020 from $2.089 billion in the same month of the previous year showing massive decline of 54.19 per cent. In May 2020 exports fell by a massive 33 percent. According to the data released by the government, exports for May 2020 stood at $1.391 billion. On the other hand, the country’s imports stood at $2.851 in May 2020, showing a decline of 43 percent. 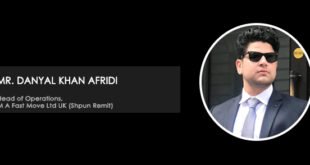 Govt must keep providing every facility, access for the smooth flow of remittances

We created state of art platforms for flawless experience to customers Interview with Mr. Danyal …