Facebook COO Sheryl Sandberg is one of the most inspiring women in tech in our time. Back in 2012, she delivered a speech to the graduating class of Harvard Business School, which was truly remarkable, motivational and powerful. Sandberg urged the graduates to “get on a rocketship whenever you get the chance”, turning the address to one of the greatest speeches ever. 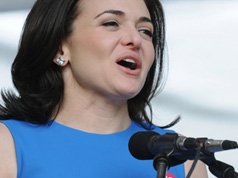 Get inspired with the following main outtakes from Sheryl Sandberg’s HBS Class of 2012 Address:

“Now ordinary people have voice, not just those of us lucky to go to HBS, but anyone with access to Facebook, Twitter, a mobile phone. This is disrupting traditional power structures and leveling traditional hierarchy. Voice and power are shifting from institutions to individuals, from the historically powerful to the historically powerless, and all of this is happening so much faster than I could have imagined when I was sitting where you are today and Mark Zuckerberg was 11 years old.” “Google had no business units, so what was there to generally manage. And the job was several levels lower than jobs I was being offered at other companies. So I sat down with Eric Schmidt, who had just become the CEO, and I showed him the spread sheet and I said, this job meets none of my criteria. He put his hand on my spreadsheet and he looked at me and said, Don’t be an idiot. Excellent career advice. And then he said, Get on a rocket ship.” If you’re offered a seat on a rocket ship, don’t ask what seat. Just get on.

“So instead I want to know what’s your biggest problem and how can I solve it. My jaw hit the floor. I’d hired thousands of people up to that point in my career, but no one had ever said anything like that. I had never said anything like that. Job searches are always about the job searcher, but not in Laurie’s case. I said, you’re hired.” “Lori has a great metaphor for careers. She says they’re not a ladder; they’re a jungle gym.” “Move sideways, move down, move on, move off. Build your skills, not your resume. Evaluate what you can do, not the title they’re going to give you. Do real work. Take a sales quota, a line role, an ops job, don’t plan too much, and don’t expect a direct climb. If I had mapped out my career when I was sitting where you are, I would have missed my career.” “A good leader recognizes that most people won’t feel comfortable challenging authority, so it falls upon authority to encourage them to question. It’s easy to say that you’re going to encourage feedback but it’s hard to do, because unfortunately it doesn’t always come in a format we want to hear.” “Motivation comes from working on things we care about but it also comes from working with people we care about, and in order to care about someone, you have to know them. You have to know what they love and hate, what they feel, not just what they think. If you want to win hearts and minds, you have to lead with your heart as well as your mind.”

“As you and your classmates spread out across the globe and walk across this stage tomorrow, I wish for you four things: First, keep in touch via Facebook; this is critical to your future success! And since we’re public now, could you click on an ad or two. Two, that you make the effort to speak as well as seek the truth. Three, that you remain true to and open about your authentic self. And four, most deeply, that your generation accomplish what mine has failed to do. Give us a world where half our homes are run by men and half our institutions are run by women. I’m pretty sure that would be a better world.”

Ellen degeneres’ commencement speech at Tulane University Oh boy, thank you so much, thank you …